PCIe slots allow you to add expansion cards on your motherboard to add more functionality to your PC. They come in various sizes, each designed for a specific category of expansion cards. Whether you want to add a graphics card for gaming, a WiFi network card, or a dedicated sound card, you use the PCIe slots.

There are two basic interfaces that a computer uses to add more components, SATA and PCIe. SATA interface is used for spinning hard disks primarily these days and also for CD/DVD drives.

PCIe, on the other hand, is far superior in terms of transfer rate and thus supports high speed components ranging from NVMe SSD all the way to GPUs.

As mentioned earlier, there are different sizes of PCIe slots and knowing how they function and what differentiates one slot from the other is crucial for PC builders.

Here we will talk in depth about PCIe in general and PCIe slots in particular.

In order to understand what PCIe slots look like, a picture would be the best guide. 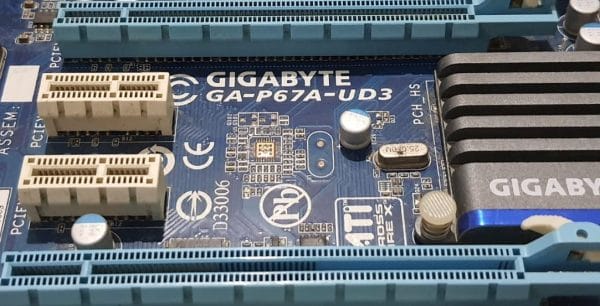 As you can see in the image above, PCIe slots come in different sizes. They are distinguished mainly by their PCIe lane count.

Also Read: What Does a PCIe Slot Look Like? – In Depth Look

What are PCIe Slots, Lanes, Generation?

There are a few important characteristics of PCIe interface you need to understand in order to utilize the slots properly i.e

let us start from the beginning.

PCIe stands for Peripheral Component Interconnect Express, and it is an internal bus interface standard that is used to connect internal high-speed components to your desktop motherboard.

There is a list of things that you can attach to the PCIe slots. We have summarized 10 Things That Can be Plugged in PCIe Slots here.

PCIe slots have PCIe lanes hardwired to them for transporting data.

Understanding PCIe lanes is very important for understanding what PCIe slots are and how they work.

A PCIe lane is basically the path through or the connection through which data is transported to and from the slot to the CPU. Different slot sizes have different amount of PCIe lanes.

The more PCIe lanes a slot has, the higher is its throughput and the more demanding expansion cards it can support. There are four types of PCIe lane configuration you can find on PCIe slots i.e x1, x4, x8 and x16.

In most cases, the number after “x” tells you the number of PCIe lanes the slot has. The x16 slot, however, is a bit confusing to understand as the number 16 here after “x” does not always mean 16 lanes; more on this below.

Therefore, a PCIe x4 slot has 4 PCIe lanes or it can support a device with a throughput requirement of upto 4 PCIe lanes such as an NVMe SSD expansion card.

You must note that the amount of PCIe lanes a PC has in total are generally dictated by the CPU and the Motherboard. Therefore a PC DOES NOT have unlimited lanes.

The total number of PCIe lanes a PC has can be found by looking at CPU specsheet and motherboard CHIPSET specsheet.

Most mainstream processors have 16-24 PCIe lanes with only the extreme and premium processors reaching 44 or more dedicated PCIe lanes.

Motherboards also provide PCIe lanes, however, not all of them are user accessible. For instance, Intel Z490 motherboard has 24 PCIe lanes, however, depending on how the board is configured you could only have 4 to 6 lanes available for use and the rest would be reserved for internal components like SATA ports, USB ports etc.

Therefore, with a configuration of 16 CPU lanes + 4 provided by the motherboard chipset, you will have a total of 20 PCIe lanes to use in total. With this you can, for example, add a single x16 graphics card and a single x4 NVMe SSD Card.

Or perhaps you could add a single graphcis card (x16), a WiFi Card (x1), a FHD video capture card (x1) and still have 2 PCIe lanes. This all depends upon how the motherboard is configured and what type of slots it provides.

Again, you can find the number of CPU and motherboard PCIe lanes in their respective data sheets. The following guides detail PCIe lanes in depth.

All modern desktop PC motherboards come with at least one PCIe slot that will allow you to hook up extra devices like VGA cards, Sound Card, RAID controllers etc to extend your PC’s functionality.

The only difference is that not all boards will come with the same number, type, or even version of PCIe slots.

The number of PCIe slots you have depends a lot upon the motherboard form factor in addition to the total amount of PCIe Lane count, as covered earlier.

An ATX motherboard, for instance, typically offers a whole lot of PCIe slots in different sizes. A Mini-ITX motherboard, on the other hand, being the smallest motherboard for desktop computers, offers only a SINGLE PCIe x16 slot despite supporting more than 16 PCIe lanes!

There are typically 3 PCIe slot sizes found on almost all commercial motherboards:

The Curious Case of the x16 Slot

Many time you will find an x16 slot wired to only x8 or even just x4 lanes! Always refer to the specsheet to understand the true lane count of the slot.

If you only have a single x16 slot on your motherboard, then this will almost definitely have 16 PCIe lanes coming directly from the CPU.

If you have MORE than one x16 slot, however, then the second x16 slot would either be operating in x8 or x4 mode. This is due to the limited nature of PCIe lanes you have available on your PC. A typical PC with 20 to 24 PCIe lanes cannot have two full x16 slots as that would take the lane count to 32!

The overall performance of the PCIe slot is significantly affected by its PCIe version.

The best part about the PCIe standard is the cross and backward compatibility of different slots with different PCIe devices and generation.

If you have an x4 slot and the device you want to install is an x1 device, you won’t need any special software to work around the hurdle.

Plugging in a lower lane count expansion card into a high lane count slot will let the device work as intended albeit with the cumulative bandwidth of the slowest component.

Likewise, a high lane count expansion card can go into a small lane count slot as long as it can fit. So, you can plug your x16 graphics card into an x8 slot and it will still work, but at the speed of the x8 slot.

This compatibility also cuts across the versions of PCIe so a PCIe 3.0 device can work in a PCIe 2.0 slot and vice versa.

The only caveat is that the configuration will work at the lowest common speed between the slot and the component.

The motherboard above is an excellent example of how PCIe slots are configured on a typical mid range full ATX motherboard.

You will notice that the motherboard above has 3 PCIe x16 slots (two in silver color and there is one black colored x16 slot at the very bottom that may be hard to see).

Due to the Lane limitation, as mentioned earlier, this motherboard has been specified to be used in x16/x0/x4 OR x8/x8/x4 modes.

In other words, you can use the motherboard in two modes.

Here you will notice that mode 2 is great for SLI or Crossfire setup where you have two graphics cards. The only issue is that both graphics card will work at reduced performance due to half the supported bandwidth. The difference as tested, however, between running the card in x16 or x8 is only marginal.

This motherboard also has two smaller x1 slots that can be used for smaller cards as well.

To get FULL 2 x X16 slots you will need to get workstation grade CPUs from the Intel X-series or AMD Threadripper series and also workstation grade motherboards to give the higher number of PCIe lanes required to run the two or more x16 slots at full bandwidth.

A Brief History of the PCIe Slot

Several other slots were used to connect expansion cards to the motherboard before the introduction of the PCI slot in 1992 by Intel.

For example, before the introduction of the original PCI standard, ISA (Industry Standard Architecture) bus slots were the main interface for connecting expansion cards.

PCI standard was created to alleviate the shortfalls of the previous buses that were at the time much slower and hence inefficient for the growing throughput demand of the expansion cards.

The PCI standard became more widespread towards the end of the 90s and saw some improvements. However, it was replaced by the more efficient PCI Express standard that has been in use since 2002.

Difference Between PCI vs PCIe

PCIe makes use of independent transfer lanes instead of the shared bus that the older PCI standard uses. The ability to transfer data in multiple lanes means an overall increase in bandwidth.

The main difference between the two typologies was that the PCI used Parallel where as the PCIe used Serial architecture. Basically with the PCI parallel architecture, each connected device shared the same bus.

The limitation here was that since every device shared the same bus, when a higher number of devices where to be connected, they would have to wait for the bus to free up to send and receive data.

PCIe, on the other hand, completely changed the topology to a serial architecture where each and every device has its own dedicated bus now.

The current v4.0 has a throughput of around 32 GB/s and bi-directional bandwidth of around 64 GB/s!

Final Words – Do You Need to Use PCIe Slots?

The key takeaway from here is that a PCIe slot is the primary interface through which you connect high speed expansion cards that add functionality to your PC.

Here we talked extensively about what are PCIe slots by looking into PCIe lanes, slot configuration and sizes, and PCIe version.

There are, of course, chances that you may never have to use PCIe slots at all for your system.

For instance, if your CPU comes with an integrated graphics card and if your motherboard comes with display output ports, a soundcard, and a network card – like most motherboard these days do – then chances are that you may never have add another expansion card anyways.

This is particularly true if you are an average home or office user. Basic PC for home use have everything you need installed onboard the motherboard and the CPU. Only professionals and gamers may require the use of PCIe slots for adding more functinaloty to their system.