Yes, the PCIe x16 slot you use DOES matter because on most motherboards, the second PCIe slot only offers either 8 or even just 4 PCIe lanes.

PCIe x16 slots are the most confusing to understand. If you are building a PC and you have multiple x16 slots on the motherboard, then knowing which one to use is very important.

PCIe lanes, bandwidth, and slot configuration may all sound confusing to you, but they are essential in understanding how your overall system works and how to properly build a PC.

The PCIe x16 slot is the fastest in any generation as it has the most PCIe lanes available and this results in a higher data throughput (speed in layman’s terms).

This slot is ideal for large and power hungry cards like a graphics card.

However, not all x16 slots are created equally.

Some x16 slots have the physical size of an “x16” slot, but have fewer lanes. So does it matter which PCIe x16 slot I use? Yes, it does and in the text below we will explore why.

Brief on PCIe Lanes and Slots

PCIe lanes are the highways that connect the PCIe slots to the system for data transfer.

A typical PC has about 20 PCIe lanes.

All expansion cards have a certain number of PCIe lane requirement. Graphics cards are designed to ideally use 16 PCIe lanes. However, they can operate at a lower lane count as well but at a somewhat reduced performance.

Now due to the limited nature of PCIe lanes on a PC, you cannot install two graphics cards on two full 16 lane x16 slots, as that would demand a PC with 32 PCIe lanes – commercial PCs simply do not have so many lanes.

Hence, in order to operate both cards, the lane count is divided between the two x16 PCIe slots. More on this below.

So Does It Matter Which PCIe x16 Slot I Use

We have already established that it does matter what PCIe x16 slots you use, and here are the reasons why.

Unlike the x1 which are straight forward and offer just a single PCIe lane, the same is not true for an x16 slot!

Sometimes what may seem like an x16 slot may only have 8 or even 4 lanes.

The True PCIe x16 slots have full 16 lanes are the most ideal for graphics card.

As a rule of thumb, the top or the first PCIe x16 slot found on a motherboard is a TRUE PCIE x16 slot with 16 lanes.

Hence if you have a single graphics card, ALWAYS use the first PCIe x16 slot!

However, it is worth noting that there is huge caveat when using them.

Take the following motherboard for instance:

Meaning if only the top slot is occupied, it will operate at 16 lane bandwidth.

However, if the bottom slot is occupied, both the top and second slot will clock down to 8 lanes each.

Note that EVEN if you do not occupy the top slot and only occupy the bottom x16 slot, it will still operate with 8 lane bandwidth because the bottom slot only has 8 hardwired PCIe lanes!

In other words, if you have a single graphics, always use the top PCIe x16 slot.

Many motherboards offer what visibly may seem like an x16 slot but only has a lane-width of 4 PCIe lanes.

An x16(x4) is VERY common among budget motherboards.

Take for instance the following motherboard, it has two PCIe x16 slot. However, counter to your intuition, the second PCIe x16 slot, in fact, only has 4 lanes.

Hence, this would NOT be the ideal slot for graphics cards at all.

The bottom x16 slot with 4 lanes would instead be ideal for smaller cards like SSD expansion cards, video capture cards, risers etc.

This maybe an important point to note for you incase if your motherboard offers different PCIe version for the CPU and motherboard chipset lanes.

PCIe version of the interface/slot has huge ramifications on the performance of the expansion card installed.

Each successive generation doubles the throughput (speed) per PCIe lane compared to the previous generation.

The following table sums this up.

Hence, on certain motherboards, you may find one x16 slot conforming to a newer PCIe generation while the other conforming to the older.

Take the following motherboard for instance,

You can learn all this from the specifications of the motherboard, which we highly recommend you check out before building your setup.

The following is the specification for this motherboard: 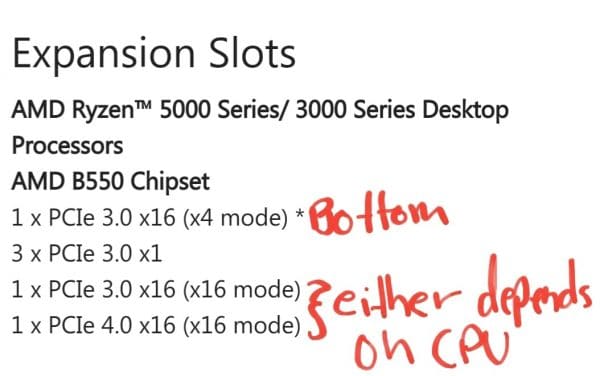 Basically, what it says is that the bottom x16 slot operates at x4 bandwidth but will only be conforming to version 3.0 speeds.

The top PCIe x16 slot has 16 lanes but it can conform to either PCIe version 3.0 and 4.0 depending upon the processor you have.

In other words, if you have a 3rd or older gen AMD Ryzen processor, the top slot will conform to version 3.0.

If you have a 5th generation AMD Ryzen processor or newer, then the top x16 slot will conform to the newer version 4.0.

Hence, it is important to note here that x16 slots on the same motherboard can have different PCIe versions.

The version of the PCIe slot has a lot of impact particularly if the card installed has a very high throughput.

PugetSystems has done a study on the impact of PCIe version on the performance.

These motherboards are generally intended for workstation grade builds.

Recall from earlier that a typical budget oriented commercial PC has 20 PCIe lanes or so and therefore it is hard to have multiple True x16 slots on them.

The motherboard has 5 x PCIe x16 slots. The first two are TRUE x16 slots with 16 lanes each. The rest of the three have 8, 4 and 4 lanes respectively.

Any of the True x16 PCIe slots above can be used to work the graphics card to its full potential.

The Impact on the Performance

Using a x16 slot with 8 or 4 PCIe lanes can have some impact on the performance of the card installed.

For instance, if you install a graphics card in an 8 lane x16 slot, you can expect some marginal performance difference.

Gamersnexus.net has already done a study on this where they compared the performance difference of GTX 1080 on PCIe 3.0 x16 slot vs on PCIe 3.0 x8.

The performance difference is marginal but noticeable.

The performance difference will be a lot more pronounced if you put a high end graphics card in a 4 lane PCIe x16 slot.

Another comprehensive study that I would like to point you to is the one done by PugetSystems.

They had some very interested results whereby they found that having a single graphics card in x16 or and x8 slot does not have a huge impact on the performance.

However, when running two of the same graphics card together there was noticeable difference in performance when using the two in x8/x8 slot in comparison to the same used in full x16/x16 slots.

In some instances, the difference was as much as 30%!

Another important point to reiterate is that the PCIe version can also have a great impact on the performance, particularly if you are using top of the line graphics card that has the capacity to produce a lot of data.

You can read the full study here.

So in short, the answer to the question, does it matter which PCIe x16 slot I use, is a yes!

Basically, if you have two x16 slots, and one graphics card always use the top one for the graphics cards to squeeze the most performance out of it.

It is always recommended that you read the manual/specsheet of the motherboard to understand how many lanes a PCIe x16 slot offers, what version it conforms to and whether it is a true x16 slot or just has 8 or 4 PCIe lanes instead.