The reason for this has to do with the fact that on most motherboards, the first PCIe slot is almost always the TRUE x16 slot – i.e has full 16 lanes. Plus, the first x16 slot is the closest to the CPU hence you get quicker data transmissions with lowest latency.

If you have dual or triple graphics cards, however, then that changes a few things depending upon what motherboard you have and whether you have NVIDIA or AMD graphics cards.

For many custom PC builders, the GPU is one of the most important peripherals that gets added to the computer, and for good reasons. From simulation to gaming, graphics card is an essential component for professional PC builds.

However, if you have multiple PCIe slots on your motherboard, particularly multiple x16 slots, then you may ask which PCIe slot for GPU is ideal.

In the following text we will talk more about PCIe slots with closer look at the x16 slot and will also talk about why the slot matters when installing your graphics card.

A Primer on PCIe Slots and Lanes

Image: Two most common PCIe slot sizes on motherboards are x1 and x16.

A motherboard comes with many PCIe slots. The PCIe slots, additionally, come in several different configurations that determine how many lanes you have available on the slot.

For instance, the x1 slot has a single lane, while the X4 and X8 have four and eight lanes respectively.

The largest PCIe slot on a motherboard is the the X16 and this one has 16 PCIe lanes (ideally).

The lanes determine the amount of bandwidth that you can achieve with a device-slot pair, and so an X16 slot will provide the most bandwidth. It is thus suitable for cards that generate the highest amounts of data such as a graphics card.

A graphics card processes and generates a lot of data during operation and all this data needs to be ferried across the PCIe slots, through the PCIe lanes and to the CPU.

Think of PCIe lanes as information highways. The more highways connect to a slot, the more traffic it can handle.

However, not all x16 slots are created equally. Some x16 slots have the large physical size of an x16 slot, but may only offer 8 or even 4 lanes. Therefore, you must choose the x16 slot for your graphics card carefully. We explain this further below.

The following guides will help explain or refresh knowledge on PCIe interface:

Which PCIe Slot for GPU is Ideal?

So as mentioned earlier, the most preferred slot for use with a graphics card is the x16 slot. 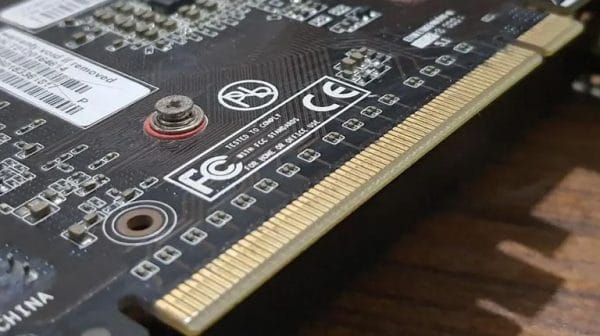 Image: A graphics card has the connector for fitting ONLY on an x16 slot.

However, you have to choose the right x16 slot if you have multiple of them on your board.

You can see in the motherboard above that while it has two PCIe x16 slots (Blue colored), only the top slot is the TRUE x16 slot with 16 lanes. The bottom x16 slot only has 4 lanes.

Therefore, in order for graphics card to work and achieve optimal performance in this case, you would plug your GPU in the top PCIe x16 slot.

What About the X8 Slot

Under some circumstances where you have multiple GPUs or if your primary X16 slot is unavailable or damaged, your next best option for a GPU will be the X8 slot.

With an X8 slot, however, you get reduced bandwidth. The throughput rate of the slot is effectively halved when you step down from an X16 slot to an X8 slot.

Why? Well, this has to do with the nature of how many PCIe lanes you have on your system. At any given time you can have about 20-24 user accessible PCIe lanes.

Having two full x16 slots will equate to 32 PCIe lanes! Since that is not possible on a commercial motherboard, the bandwidth is halved to cater to multiple GPUs and to stay within lane count limit of your PC.

Do note that the x8 slots also have the physical size of an x16 slot:

On the motherboard above, you can see that it has 3 x PCIe x16 slots. They have the same physical size, but have different lane count i.e top has 16 lanes, middle has 8 lanes and bottom slot has 4 lanes.

The motherboard basically will have the following configuration depending on how many GPUs you choose to install:

So basically, if you have this motherboard and only one graphics card, you will plug it in on the first x16 slot to get the full x16 bandwidth.

If you have two graphics cards, then you will use the first and second PCIe x16 slots. However, occupying the second slot will automatically halve the lane count of the first slot.

The final x4 slot can be used with a third AMD graphics card or with any other expansion card that requires 4 lanes such an NVMe SSD Card.

Chances are you have heard of these two terms being thrown around at one time or another. They are both used to accomplish the same thing though; allow for a multi-GPU build.

SLI is offered by NVIDIA whereas AMD offers the alternative, Crossfire. They accomplish their tasks differently, but to the user, all you need to know for now is that you’ll need at least two graphics cards and they will need to work in unison to effectively boost your PC’s GPU performance.

Also Read: How to Tell if PCIe Slot is Bad?

Does Plugging the Card in an X8 Slot Affect the GPU Performance?

Before you get all worked up, here’s some good news. Stepping down from an X16 to an X8 slot, you don’t get half the performance despite the amount of bandwidth lost. In most cases, you’ll only end up with just a few less FPSs as you would have if you were running it in an X16 slot.

For more clarity, some tests have shown that using the X16 slot over the X8 one will only give you about 2% more performance in many cases. Others, show that you can have some performance drop while using certain software like video editing software particularly with 4k footage.

With this in mind, you can rest easy that for most casual gamers, using an X8 slot for your GPU will work just fine, maybe not as good as an X16 but the performance drop will be minimal.

GamerNexus.com also had conducted a study on this matter. They concluded that the performance drop is minimal.

More on this here: Why is Second x16 Slot in SLI PCIe x8?

How To Know Which PCIe Slots You Have?

There are many ways to know what type of PCIe slots you have.

The first and the easiest way is to consult the manufacturer spechsset.

Another easy way is to physically check the slot labels.

On most motherboards, the PCIe slots are labeled so that you can easily know which slot to place your graphics card in.

Image: You can read how many lanes the slot has from the labels. For the GPU you will use the slot labelled as PCIEX16.

What is the Suitable Slot for Low-End Graphics Cards?

Therefore, the ideal slot for this GPU would be the x1 slot.

While you can mostly operate this on larger slots, installing this on an x16 slot, or even on an x8 or an x4 slot will not give it any kind of performance boost.

The reason for having a low lane requirement for this GPU is because it would not generate a lot of data. The primary use of a low-end GPU like this is to add display support to your PC. If your motherboard does not come with video-out, then you would want to procure this.

Since this is far from being a gaming or a professional GPU, it does not require more than 1 PCIe lane.

Due to the nature of cross-compatibility in the PCIe interface, you can use your graphics card on different types of slots.

However, if you have a mid-high end graphics card, the most ideal slot is the x16 slot.

When deciding which PCIe slot for GPU, you will need to look at the lane count of the PCIe slot as well as the GPU connector. Low-end GPUs, for instance, require only four lanes and thus run at full efficiency even on x4 slots.