While PCIe slots and cards are backward and cross-compatible with each other and while the smaller cards can work in longer PCIe slots, the main hindrance comes from the ideal bandwidth requirement of the card and the maximum throughput rate that the slot can provide.

Putting a faster card is a slower PCIe slot can bottleneck the card. Alternatively, putting a low demanding card in a high throughput PCIe slot can waste the slot’s max potential.

Building a custom PC is quite easy once you get the hang of some of the basic aspects like PCIe. If you have a lot of expansion cards to install, then some planning and thought needs to go into it. In most part, the answer to the question, does it matter what PCIe slot I use, is a resounding yes.

However, if you do not have multiple expansion cards to install and particularly if you only have a single low demanding device to install, like a WiFi 6 card, then it wouldn’t quite matter which slot you use.

There are some important characteristics that differentiate one PCIe slot from the other. This includes, the physical size, PCIe lane count and the PCIe version.

To understand why slots make a difference, let us look briefly into some of the characteristics of the PCIe standard.

So for starters, there are various sizes of PCIe slot i.e x1, x4, x8 and x16. Out of these four, the x8 and x4 slots physically are almost non existent on modern commercial motherboards.

Instead, motherboards use the physical size of the x16 slot and have it only connected to 8 or 4 PCIe lanes instead i.e x16(x8) and x16(x4)

The image above shows a full x16 slot with 4 lanes (bottom blue slot).

PCIe lanes are essentially pipelines that carry information to and from the CPU and the expansion card. The more PCIe lanes connected to a slot, the higher is the supported throughput rate (transfer speed in layman’s terms).

The number after the “x” relates to both the size and the amount of PCIe lanes a slot has.

As you can see, the x16 slot is perhaps the most confusing on the motherboard. Just by looking at the slot physically, you cannot tell how many PCIe lanes it actually is connected. Hence, you will certainly have to rely on your motherboard specifications.

The last thing you want is to connect a high demanding x16 card, like a graphics card, on a weaker x16(x4) slot thinking that it would have the full 16 lanes.

Slots Can Have Different PCIe Version on the SAME Motherboard

Another important point to realize is that the PCIe version also plays a hugely important role in determining the true potential of a certain slot.

The table below shows how the throughput rate compares with each PCIe generation and their corresponding lane count.

So essentially, each newer PCIe version doubles the per lane throughput rate (speed) compared to the previous generation.

This basically is related to the motherboard chipset you have.

Image: ASUS Strix B550-F Gaming has the AMD B550 chipset. The First x16 slot here receives its lanes from the CPU and conforms to version 4.0. The rest of the slots are connected to the motherboard chipset lanes and conform to PCIe v3.0 speeds.

Ideally, you should plug your most powerful cards, such as a graphics cards, in slots conforming to the newer version.

Does It Matter What PCIe Slot I Use?

So we have seen above that there are a few, but very critical, factors that determine the performance of the PCIe slot i.e the physical size, lane count and PCIe version.

However, the bottom line is that each slot differentiates itself from the other in terms of its throughput rate. And since throughput rate is the limiting factor each slot determines which device will work best with it.

As a rule of thumb, in a PCIe connection, the channel will always run at the maximum speed of the slowest component. Thus, installing a fast card on a slow slot would bottleneck the card.

Similarly installing a slow card on a fast slot would under utilize the slot.

Let us look at some practical examples:

Example 1: Installing a Low Demanding Card on a Fast Slot

The fastest slot on a motherboard that you can find is the x16 slot with 16 PCIe lanes. This is ideally used for installing graphics cards.

Due to the nature of PCIe being cross-compatible, you can actually install a low demanding expansion card on a PCIe x16 slot as well – the card will work just fine.

So for instance, if you install a WiFi 6 network card – which is actually designed to use only 1 (x1) PCIe lane – on an x16 slot, it would work, but it would severely underutilize the capacity and potential of the slot.

In other words, the WiFi 6 network card will not be benefitted in terms of speed and performance gains if you install it on a larger expansion slot. 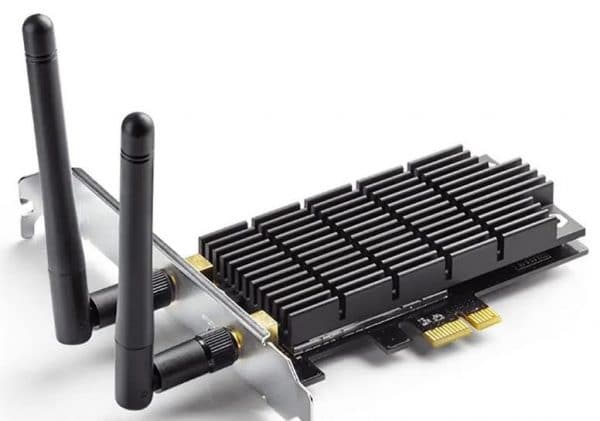 Image: TP Link WiFi 6 card. It has an x1 connector and only uses an x1 slot. You CAN install it on x4 and x16 slots as well, but you will have wasted the potential of the larger slots.

Example 2: Installing a High Demanding Card on a Slower Slot

Lets say for instance, you install a demanding graphics card that is designed for a PCIe x16 v4.0 slot on an x16 Slot running on the older V3.0 speeds.

This arrangement can potentially result in bottlenecks for the graphics card and hence the card may not perform to its full potential.

They found some visible differences in using particularly the v4.0 RTX 3090 on older slots.

Image: PudgetSystems.com. Comparison of how RTX 3090 and Titan RTX performs on different PCIe generations. A significant impact can be seen on performance in DaVinci Resolve (video editing software) when using the cards in older PCIe slots.

The results may not be too profound if you are using mid range graphics cards that do not generate a lot of data and thus almost never saturate the total bandwidth of 16 PCIe lanes.

Similarly, let us look at another example:

The NVMe SSD expansion card above utilizes 4 lanes of the PCIe v3.0 protocol.

It can support the highspeed third gen PCIe 3.0 NVMe SSDs such as the Samsung Evo 970 which can reach about 3500/3300 MB/s (read/write) transfer speeds.

If you were to install this expansion card on a PCIe v2.0 x4 slot, it would halve the read/write speeds of the same Samsung Evo 970 SSD!

Read: Can you use a PCIe 4.0 SSD on Your Older Existing Motherboard?

Also you can’t install this on a PCIe V2.0 X8 or an X16 slot thinking that the extra lane count on the slot would improve the bandwidth. Why? because the physical CONNECTOR of the expansion card is limited to x4 lanes.

This is what makes PCIe so useful for installing expansion cards to a computer. Despite the different generations and the different lane counts, everything works with each other.

However, as seen in the second example above, the performance of the device and slot it connects to conform to the slower of the two.

PCIe Slots and What Each is Ideal For

So the answer to the your question, does it matter which PCIe I use is a resounding yes. With that said, let us look at which expansion cards each slot is ideal for:

This slot only has one PCIe lane. It offers the least bandwidth for any given generation of PCIe slots. This is ideal for the following devices:

The x4 slot offers four times the number of lanes available on the x1 card. It is also larger physically. As mentioned earlier, an x4 slot has a physical size of an x16 slot on a motherboard as we saw earlier with the case of Gigabyte GA P67-UD3 above.

This slot is ideal for more demanding cars such as:

x8 slot also takes the form of an x16 slot physically on a motherboard.

Also Read: How Many PCIe Lanes Does a GPU Use?

Other than that, it is also used for

The PCIe X16 slot is the largest one you can find on most motherboards. An x16 slot has 16 PCIe lanes.

It is almost always used for graphics cards.

Occasionally for robust NAS systems, it can also be used to install NVMe SSD expansion cards with 4 slots.

Also Read: 10 Things That Can Be Plugged in PCIe Slots

When it comes to determining which slots to use, users have to be a bit keen on the labeling on the board as well as its manual.

Again, not referring to your motherboard’s manual when installing cards is a mistake. You can never know how many PCIe lanes a slot truly has or whether a certain slot can get disabled when a certain other is occupied.

Often an M.2 NVMe slot shares it lanes with another PCIe slot on the motherboard. Hence occupying either of these could disable the other.

Also, as mentioned earlier, it is common to find an x16 size slot with only 4 lanes, or 8 lanes.

Hence, if you plug your x16 device (like a graphics card) into a weaker x4 slot, it can seriously reduce its performance.

In others words, the card will get bottlenecked by the slot and may not even work. In fact, most mid and high end NVIDIA graphics card do not work in an x16(x4) slot.

Also Read: Which PCIe Slot for Graphics Cards is Ideal?

So here we have comprehensively answered the question “does it matter what PCIe Slot I Use” here. The short is yes, it does matter.

Basically, for the best performance and for preventing bottlenecks and under-utilization always match your device to the same slot in terms of lane count and generation.

However, there is more to PCIe lanes particularly the fact that they are limited in nature. You do not have unlimited PCIe lanes on your PC. We recommend you read up on PCIe lanes and how many you have in order to better understand how to configure your system.