There is a combination of features and specs that make a motherboard good or bad and that all depends upon your needs and budget.

A motherboard does not directly affect the performance of a software or a game. Instead, it directly affects with the quality and the version of components installed on it.

However, depending upon your budget, a motherboard with excessive features may actually be bad for you if you were to never utilize its high end features.

For instance, the Intel Z series motherboards are expensive because one reason being that they support overclocking. However, if you will never overclock your CPU or if you have a CPU that is NOT unlocked (overclockable) than a Z series motherboard would actually be bad for in terms of value.

In the following article, I will talk in detail about what makes a motherboard good.

So What Makes a Motherboard Good?

There is a mixture of specs that define a good or a bad motherboard for you.

Again, what maybe a good motherboard for you, may not appeal someone else either due to their spec requirements or due to budget constraints.

Here is a short list of recent motherboard chipsets, their corresponding sockets and CPUs they support.

Anyhow, after the right socket, the following is a short list of what makes a motherboard good.

Also Read: How Much is a Motherboard?

1. Having a Premium Chipset Makes a Motherboard Good

One of the first factors that determines whether a motherboard is good or bad is the chipset.

Every generation of motherboards has different chipsets intended for different budget ranges.

Intel, on the other hand has, B and H series for budget and midrange builds and the Z series chipset for premium builds.

As far as the current generation of CPUs goes, the premium AMD chipset is the X570 with the AM4 socket intended for Ryzen 3000 and 5000 series CPUs.

Among other things, the chipset determines almost every other aspect of the mother which I will explore further below.

Another very important characteristic that differentiates one motherboard from the other is the amount PCIe lanes it offers.

The more PCIe lanes a motherboard has, the more PCIe and M.2 slots it can offer. Which in turn means you can add more expansion cards to your motherboard.

The total amount of PCIe lanes your PC has depends upon both the CPU and the motherboard, however, generally, the more premium a chipset, the more PCIe lanes it can offer.

Note for Intel motherboards, not all the lanes mentioned in the table are user accessible in the form of slots, most are used internally by the system.

To learn more about PCIe Lanes, I recommend reading the following:

Version of the PCIe Slots

Equally important is the version of the PCIe lanes your motherboard offers.

This is because with each newer generation, the overall transfer rate per lane doubles. For instance a single x1 (single lane) slot on a motherboard conforming to v3.0 has a transfer speed of 0.985 GB/s. The same x1 slot conforming to v4.0 has speeds of about 1.969 GB.s.

This is very important because newer generation devices such as the Gen 4 NVMe SSD like the Samsung 980 Pro or the newer graphics cards such as the NVIDIA RTX 3000 conform to v4.0 and directly benefit from it.

3. Amount of PCIe and M.2 Slots and Their Version

However, you must pay attention to the amount of PCIe lanes each slot offers. This is particularly true for the x16 slots.

Often times an x16 slot on a motherboard can only offer 4 x PCIe lanes despite having the full x16 size.

The M.2 slots intended for NVMe SSDs also connect to the PCIe lanes. They use 4 x PCIe lanes each. More premium motherboards have multiple M.2 slot.

Again, the version of the slots do matter. This is because if you were to install a newer gen device on an older gen slot, then the device will get bottlenecked.

For instance, if you were to install a Gen 4 NVME SSD on an M.2 slot conforming to version 3.0, then its speed will essentially be halved.

PudgetSystems.com conducted a study on this topic for graphics card, whereby they compared a PCIe 4.0 RTX 3090 on older gen slots, as expected, there was a marginal bottlecneck (performance drop) when using newer GPU on an older slot.

More premium chipsets, such as the X570, offer newer version 4.0 across ALL PCIe lanes.

Newer gen chipsets such as the Intel Z690 go even further beyond with features PCIe 5.0 slots.

Often overlooked, the quality and the number of Voltage Regulator Modules (VRM) on a motherboard is one of the most important characteristic that defines whether a motherboard is good or not.

VRMs are basically sub components whose sole purpose is to provide clean and stable power to the CPU and the RAM. If you are an overclocker, getting a motherboard with the best VRM configuration is of paramount importance.

Also Read in Detail: What are Motherboard Power Phases and VRMs?

Cheap motherboards have often have a phase power design of 6+2.

High quality motherboards can feature a Phase Power Design of 12+2 and more.

Whereas, for Intel, only the Z series premium chipset such as the Z590 / Z690 support overclocking.

Also how well a motherboard can overclock and to what degree is determined by the quality of its VRM as discussed above.

Also Read: How Much Should I Spend on a Motherboard?

There are many other nuanced characteristics that determine the overall build quality of the motherboard.

The first is the construction quality of board itself and the amount of PCB layers it has. Then there is the quality of capacitors and the VRMs.

In addition to that, the more premium a motherboard is, the more robust is its heat sink design. This ranges from the VRM heatsinks, to the chipset and the M.2 slot heatsinks all designed in the effort to keep things cool particularly when overclocked.

7. General Connectivity – The Version of the USB Ports and the USB Headers Provided

The amount of ports your motherboard has and their version is also an important determining factor of how good a motherboard is.

A good motherboard, for instance not only offers newest gen USB ports built into the back panel, but would also offer USB headers to connect to the USB ports on the front panel of your PC case.

The following table should help in clarifying the different USB version and their corresponding speeds.

In addition to that more premium and expensive motherboards may also feature the more coveted Thunderbolt 3.0 ports which have a transfer speed of a whopping 40 Gbps.

And finally, you may also find motherboard with WiFi connectivity.

8. The Form Factor of the Motherboard 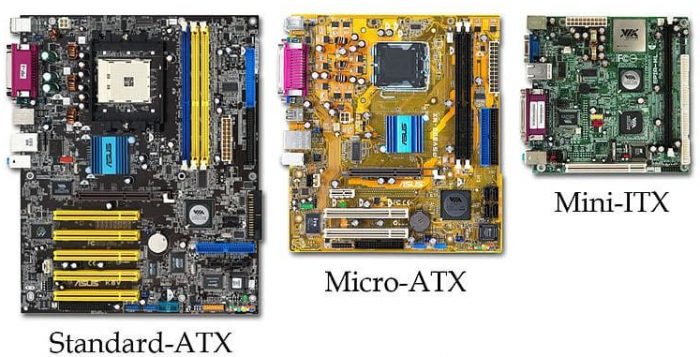 Now each form factor has its merits and demerits.

Full ATX are often the golden standard for gamers and enthusiasts. They are the largest boards and they tend to have the highest amount of expansion capability. They are, however, more expensive compared to the rest.

Micro ATX loved by those on a tight budget. They are the cheapest of the lot (if you take the same overall specs/chipset into consideration). They are inferior to Full ATX in terms of expandability.

Finally, you have the smallest Mini ITX form factor. In terms of expandability, they are the worst. However, when comparing feature by feature with a Micro ATX board, they are much more expensive, primarily due to their compact form factor. Many users prefer these boards for building a portable PC.

Hence, here the answer to what makes a motherboard good is a choice between expandability, budget and portability.

Others just do not offer enough PCIe slots to support two graphics card.

Basically, in order to enable multiple GPUs, you need to have at least two PCIe x16 slots working in x8 mode.

I advise you to read the following guides to understand this more:

And finally, for most what makes a motherboard good are the looks itself. Again, the most premium motherboards are truly magnificent to behold.

But generally, motherboards built for enthusiasts and gamers have multiple RGB headers for installing LED lights and RGB fans. They also have a good number of fan headers for case fans, water cooler, and even for VRM heatsinks.

The more DIY customization a motherboard offers and the more opportunity it gives you to make your PC a beauty to behold, the better it is.

So there isn’t a one-size-fits-all answer to what makes a motherboard good. There is a combination of factors that determines the overall quality of the motherboard.

But in the end if you are on a budget, then most of the premium features in a motherboard would not matter much to you. If you had a list of features to select for a motherboard and you selected all of them, then a motherboard could cost you a handsome $1000 or more.

However, we all know that a majority of the users do not have this kind of budget. Therefore, what would make a motherboard good for you in this instance would be the selection of only the features that would matter to you.