Generally the 100 MHz default speed of the PCIe should not be tampered with much if you want to have a stable system. However, it is a given fact that increasing PCIe clock speed to a higher number, such as 110 MHz, can improve the performance – albeit may result in system crashes.

Overclocking is simply the process of increasing a device’s clock rate. This makes it run much faster which in turn increases the number of operations it can do in a second.

Overclocking PCIe slot lets you increase their data transfer rates, hence performance (technically). To achieve this, you need to go above the 100MHz default speed.

This generally results in more heat production so you will need effective cooling. But another common side effect is that you can start getting crashes.

This is why you may need test and test in order to find the right frequency number. If the PCIe overclocking results in crashes then going back to default is recommended.

What Should I Set PCIe Frequency When Overclocking?

Whenever you do an overclock, the main aim is to squeeze out some more performance from your hardware.

100MHz is the defaults stable clock speed and is usually enough for most users running most tasks.

However, if you have an overclocked processor and need to bring out better performance from your PCIe bus, you can increase the clock speed.

Also Read: How to Check if CPU is Overclocked?

Overclockers, generally try to set the PCIe frequency between 101-120 MHz.

The higher you go, the more the effects you will see.

It will be necessary to know how to safely go about this process if you are new to overclocking. Also, knowing how to fix basic issues and keep your system stable during operation is necessary. As there is a risk, you should take care not to damage your setup.

If you are adamant on overclocking the PCIe bus, take things incrementally and gradually.

To determine what should I set PCIe frequency when overclocking, here are some things to consider.

As initially stated, for more safety, you should do this in steps so that you see which values are not ideal for your system.

101-110 MHz range is typically fine for most overclockers. This range offers good stability for your system. You will not need to worry about getting too many crashes or the grim Blue Screen of Death (BSOD).

You may also see some performance different from your installed card. These can be seen via benchmarks and in some cases, the benefits will be seen in real-world performance.

One of the things you may need to watch out for is temperature spikes in your system. Having an adequate supply of cooling fans should help with this.

At these high values, you may see performance improvements, however, you will also have to deal with a lot of crashes, sometimes happening back to back.

The system might become unstable at these high values because your cards are now getting and transmitting more data than they are built for.

However, it is not unlikely for users to overclock to these high-frequency values and still have a stable enough system. It mainly depends on the specific system as well as how its configured.

Some users can set the PCIe frequency values above 120 and still be operating fine. However, such high frequencies can be more harmful than good. You may end up doing irreparable damage not only to your card but also to the slot itself.

In some cases, if the PCIe speed is too high above its original value, you may end up with errors when writing data and files to disk. This may result in corrupted and unusable files which can lead to data loss.

How to Change  / Overclock the PCIe Frequency

The PCIe bus frequency can be changed via the BIOS on your motherboard.

Depending upon the BIOS version you have, the location of the settings may differ.

However, what you are essentially looking for are PCIe settings. There you may find controls for the PCIe Frequency.

The following image is an example of what to look for in your BIOS.

The obvious benefit of overclocking includes increased data rates across the system.

Increasing the clock speeds can help with the rendering of textures and improve the frame rate.

Furthermore, users have also noticed some significant improvements in frame rates in some very demanding games. You can even get better performance in benchmarks when using expansion cards over an overclocked PCIe bus.

Here we will reference one of the user case studies on Tomshardware. It is worth noting that the case study is fairly old, but it does convey the overall message.

The user here overclocked the base 100 MHz frequency to a whopping 130 MHz! This is absolutely not recommended unless you are not concerned about frying your system.

Anyhow, the following results were concluded for the two benchmarks that do matter for gamers. 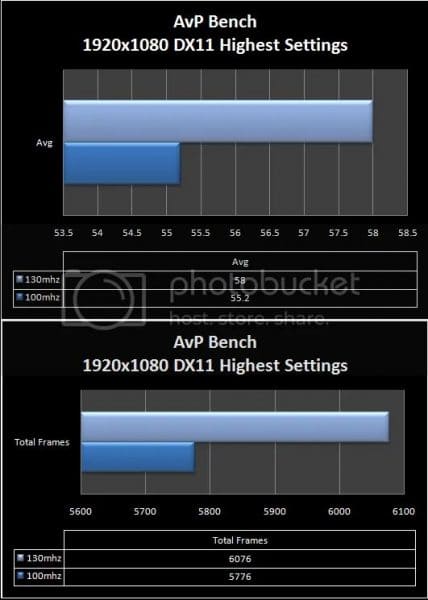 Here you can see a 5% increase in performance.

Overall, the performance difference, in my opinion, is a bit underwhelming given that it comes at the cost of huge system instability.

However, for overclockers who want to squeeze even the tiniest bit out of their gaming hardware, PCIe overclocking can be explored.

You must note that EVERY connected peripheral on your PC relies on the PCIe bus, even the SATA controller that connects with the hard disks, sound card on the motherboard, the Wifi adapter etc

Therefore, an issue with the PCIe bus can result in issues for all of your system components. The worst of this issue could be data loss on your hard disks.

Overclocking any part of the computer introduces certain risks to the system, but on components like the CPU and GPU, the errors are localized.

Risk involving PCIe, on the other hand, can have a trickle down effect on the rest of your hardware.

One of the users wrote:

One of the things you may notice is that the system will run a bit hotter. The computer will be drawing in more current and heat will be produced in the process. The heat will need to go somewhere – preferably outside the computer.

If you do not have a good cooling solution, you may end up getting poor performance even with a higher clock speed due to throttling, which is a safeguard that’s put in place to protect the components of the system from damage due to excessive heat.

But besides the overheat, the one very important and common issue with PCIe overclocking is system crashes or the expansion cards installed failing to operate. 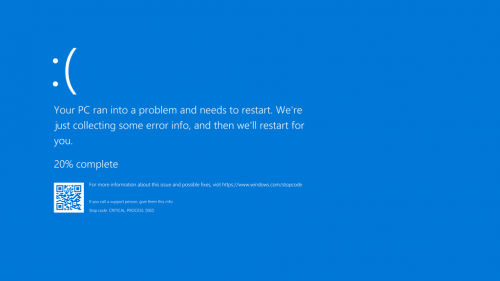 Image: Blue Screen of Death, aka BSOD, a common issue that occurs when hardware fails.

If you are an enthusiast and adamant on overclocking your PCIe bus, then, it is important to know what should I set PCIe frequency when overclocking so that you do not damage your PC.

A safe value means you will suffer fewer problems down the road and also get to enjoy slightly better performance from your hardware.

Overclocking PCIe bus isn’t for everyone and different builds will work with different values. So, to get what value works for yours, you will need to do some experimentation.

The actual number will depend on the motherboard as well as the chipset, but testing your frequency and increasing in small increments will let you find a suitable and stable value for your PCIe frequency when overclocking.

Just do not go overboard.