While multitasking efficiency is the first thing that comes to mind when we talk about having many cores on a CPU, there are certain professional tasks like rendering and encoding that are heavily reliant on having a lot of cores as well.

On top of that, most of the newer games, particularly the AAA titles, make use of multiple cores for better performance as well.

5 Way to Check How Many Cores You Have

There are countless ways to check how many cores you have on your CPU in all environments including Windows, MacOS, iPhone or Android.

Let us talk about how to figure the amount of cores in each of these OS.

1. Finding How Many Cores You Have on Windows

On Windows there are several ways to check out the number of Cores your CPU has. We will have a look at a few ways:

i. Through Task Manager

Do Not Be Confused by Logical Processors

You must not confuse Logical Processors with Cores.

Logical processors are basically the amount of threads you have on your CPU. Every core essentially has as single thread. However, on CPU with multi-threading technology (i.e Intel Hyper-threading), they can have 2 threads per core.

The number next to the field marked as “Logical Processors” is 8 since the processor in question here, i.e the Intel Core i7-7700HQ, offers hyper-threading and thus has 2 threads per physical Core.

ii. Through the System Information App 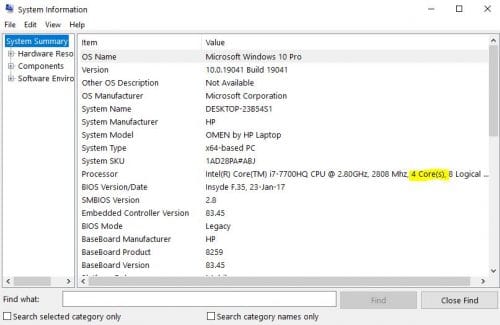 The second method is to press the Windows Key + R to open the “Run” dialog box. Type msinfo32 and press Enter.

The System Information app will open. Choose “Summary” and look for “Processor” details. It will show you how many cores your CPU has.

To check the Core number on your Windows computer using the command line, open cmd and type the following:

If you know the model name and number of your processor, you can head over to the vendor’s website to get all the information you need for the processor including the number of cores.

This is an excellent method to find out the number of Cores you have if you do not have the CPU installed in your PC yet. 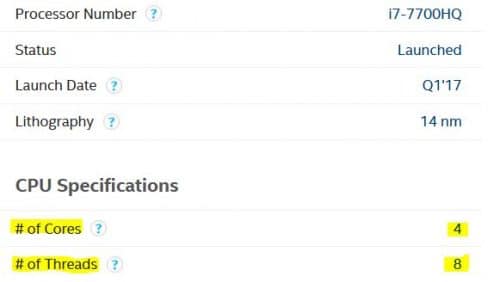 You can also try third-party free software such as CPU-Z. With this software, you can not only check the amount of Cores your CPU has, but it will also give you a myriad of comprehensive information about your CPU.

Also Read: Is a Dual Core Processor Good for Gaming?

2. Number of Cores in a Mac

On MacOS, you can find out the number of cores you CPU has from the System Report service.

3. Number of Cores in an iPhone

While there’s no direct way to find the number of cores and other CPU characteristics in an iPhone, you can download and install the “Lirum Device Info Lite” app from the App Store.

4. Number of Cores in Android Devices

If you own an Android phone or tablet, it’s also easy to check the number of processor cores you have using an app called CPU-Z.

Along with the number of cores, this app gives you a plethora of information regarding the rest of device’s hardware.

Why Processor Cores Matter for Your Devices?

As mentioned earlier, every CPU has two benchmarks that you need to take in to consideration when purchasing them i.e Single Core and Multi Core.

When you review the benchmarks scores for processors using tests like Cinebench R20, Cinebench R23, Passmark etc, all of these offer separate results for single-core and multi-core performance.

The multi-core performance of a CPU is mostly judged based on, you guessed it, the number of cores it has.

If your tasks require the use of multiple cores then you need a CPU with a high score in the multi-core performance department.

These days almost everything utilizes multiples. Whether you are a  someone who works on large and complicated excel sheets with a lot of formulas, or perhaps if you are someone who often does video rendering and encoding, then what you need a CPU with a high core count.

In fact, if you are a gamer, most of the AAA titles make sure of multiple cores these days.

Let us look how the Single-Core and Multi-Core performance scores vary from CPU to CPU using Cinebench R23 scores.

Here you can see that both processors have more or less the same single core performance despite Ryzen 5 5600X having 6 cores and the AMD Ryzen 7 5800X having 8 cores.

Most of the tasks whether you are graphic designing, photo editing, creating floor layouts in CAD, or even gaming, leverage single cores the most.

How Many Cores do CPUs Have These Days?

Considering the latest generations i.e AMD 5000 series and Intel 11th Gen processors, you can expect the following max amount of cores in CPUs.

In this article, we talked comprehensively about how to check how many cores you have on different devices and also why having a lot of cores matters.

By being aware of the CPU cores, you get a better idea of the multi-tasking capabilities of your devices with different operating systems from Windows to macOS to Android.

It is also worth highlighting here that a Core in an Android or an Apple phone does not have the same architecture or the performance grade of those found on laptop and desktop CPUs.

Learning how many cores a CPU has is also important to in order to gauge whether you are overspending or not.

For instance, if you do not plan to work on tasks that require a very high core count, then you are better off going for an economical option i.e a CPU with a lower core count but with a good single core performance.