Comparing AMD to Intel is like comparing oranges to tangerines. The closest AMD equivalent for an Intel Core i5 is the AMD Ryzen 5. This is a mid-tier line of processors that offer competitive price-to-performance ratios.

AMD has recently gained a lot of attraction, eventually looking for horns in the battle for processor supremacy with Intel. With top-of-the-line chips across all price points, many might wonder what AMD is equivalent to Intel Core i5.

A direct comparison is not possible, however, because even in the Core i5 and Ryzen 5 families, numerous CPU models vary in performance across generations and even within generations.

But the common notion here is that AMD Ryzen 5 and Intel Core i5 are most reasonable for those looking for performance and value. When in doubt, go for a mid-range Intel Core i5 or AMD Ryzen 5 processor. Whether you are building a gaming, productivity, or work PC, these mainstream lines of processors can handle your tasks very well.

They excel in terms of single-core performance in particular. The single-core version of a Core i5 and Ryzen 5 is on par with their Core i7 and Ryzen 7 counterparts.

What is AMD Equivalent to Intel Core i5? 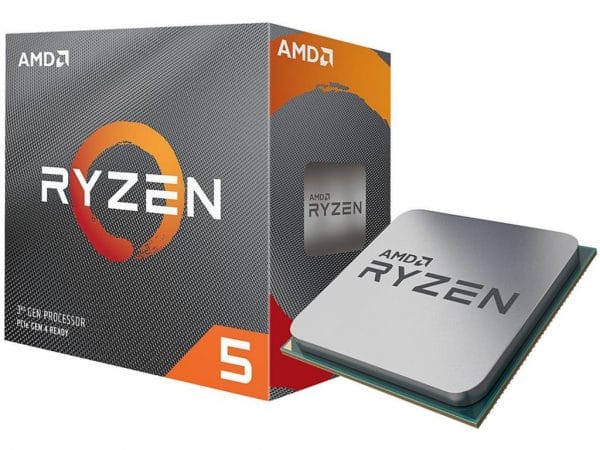 Ryzen 5 is the AMD equivalent of the Intel Core i5. It is as simple as that. It denotes a line of processors winning users to the “Team Red” since April 2017 with the first generation, Ryzen 5 1600X.

The Intel Core i5 and the AMD Ryzen 5 within a generation are more or less the same in performance.

However, this is not always the case, particularly with the recent generation of Ryzen processors. AMD has improved its performance by leaps and bounds, and thus you should check out benchmark results such as Cinebench R20 or R23 for a better understanding of a particular processor you want to compare.

But again, when comparing performance and value, Intel Core i5 and AMD Ryzen 5 are close rivals. Comparing AMD Ryzen 5 with any other Intel Core series, such as i3 or i7, would not be fair in terms of price point exceptionally.

Ryzen 5 refers to a family of AMD processors with few characteristics.

AMD Ryzen 5 Generations and Top of The Line CPUs

Like the Intel Core i5 series, the Ryzen 5 series has different generations, with each age significantly better than the previous one.

The current AMD generation of the chip is the 5th. This features the series 5000 processors released in the fourth quarter of 2020.

Let us look at the performance and specs of some of the top Ryzen 5 new-gen processors.

Also Read: What is a Good Processor Speed for a Laptop?

Characteristics of Intel Core I5 Processors

The Core i5 lineup is aimed at users with demanding power requirements. However, it is affordable enough to be mainstream.

Intel Core i5 Generations and Top of The Line Processors

Also Read: What are PCIe Lanes?

Let us now look at how the processors compare using benchmarks.

The free tool lets you compare and benchmark your CPU performance with tests based on real-world computer usage.

For instance, let us compare the single and multi-core performance of the Intel Core i5 -11600K vs. the AMD Ryzen 5 5600X using the Cinebench R20 benchmark and Passmark Benchmark results.

As far as the single-core performance goes in this benchmark, the results are pretty comparable.

The AMD Ryzen 5 5600X seems to take the cake regarding its multi-core performance.

Again, according to Passmark scores, both have similar single-core performances.

The overall winner in the Passmark benchmark is AMD Ryzen 5 5600X owing to its better multi-core performance.

When comparing processors, you must look at their single and multi-core performance.

This is because certain apps and tasks rely more on a single core. In other words, they do not utilize all cores. On the other hand, other jobs leverage multiple CPU cores.

Games like FPS, RPG, online MMORPG games, and professional work like designing in CAD or working in the timeline are all highly single-core-based tasks.

On the other hand, games like strategy and simulation games and work like rendering and encoding are multi-core reliant.

Therefore, you have to gauge your needs well. In most cases, for gamers and most intermediate professionals, Single Core performance should be the more important characteristic to look at.

Also Read: Is a Quad Core Processor Good for Gaming?

The following table compares the top processors from their respective categories in the Core i5 and the Ryzen 5 series.

So to reiterate the answer to what AMD is equivalent to Intel Core i5, it is AMD Ryzen 5. However, when drawing up a comparison, you must consider the generation and the processor type.

For instance, you cannot compare a laptop-based Intel Core i5 processor with a desktop-based Ryzen 5 processor. Laptop-based processors are far weaker than their desktop counterparts, so this comparison will not work.

Also Read: How to Check How Many CPU Threads I Have

Ojash
Ojash Yadav is the lead technical writer and resident tech guru at PCGuide101. He is a computer science graduate with over 8 years of experience in the IT field and a wealth of knowledge about computer peripherals. He has a passion for breaking down complex technical concepts and his goal is to make sure that our readers understand the technical details of the products they're interested in without getting lost in jargon. Ojash has over a decade of experience writing about the latest and greatest in the tech world, his articles have been featured in many popular tech publications and he's known for his thorough and unbiased reviews. He conducts extensive research and testing on the latest products to ensure our readers always get the most reliable information possible.