You can add more SATA ports to your motherboard using a device called a SATA Expansion Card (also known as SATA Port Multiplier).

Essentially, it is a PCIe device that connects to a PCIe slot on your motherboard and may feature multiple SATA connectors for connecting your storage devices to.

A modern motherboard has multiple SATA ports that allow for connecting hard disk drives, solid-state drives and optical drives to a computer.

Now there are many different types of SATA expansion cards. Some are large and some are small. Some have a RAID controller while others don’t. Here, we will explore the SATA Port Expansion cards further and talk about their important characteristics.

So How to Add More SATA Ports to a Motherboard?

As mentioned earlier, adding more SATA ports to your motherboard is possible and is done through a port expansion card.

These are easily available and many are offered for quite cheap.

The following are different ways to add more SATA Ports to your motherboard. Some methods are cheap, and others are expensive intended for professionals:

We also recommend that you read the buyer’s guide below on how to choose the expansion card below to understand which one to buy.

One of the cheapest ways to increase the amount of SATA ports you have is to use the SATA port multiplier.

Essentially, this device takes one SATA port and multiplies it into several more.

The issue here is that downstream bandwidth from a single SATA port is not shared effectively and can present a lot of bottlenecks for the connected drives.

While they are cheap, but due to performance and compatibility issues, we do not generally recommend these. 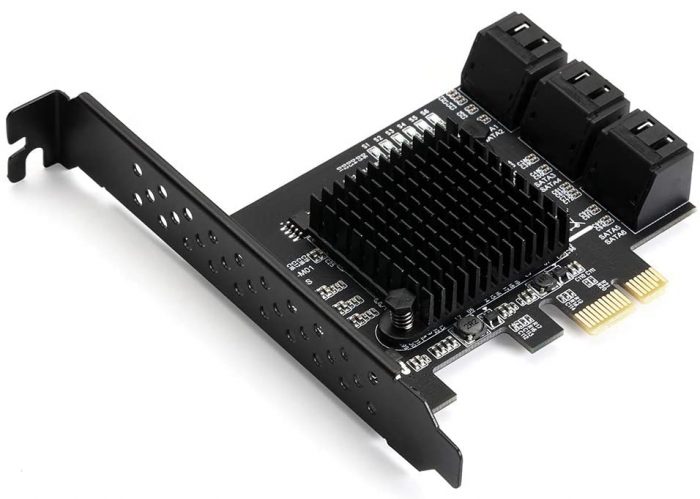 These are your general run of the mill SATA PCIe Expansion cards. When we talk about how to add more SATA ports to motherboard, this is generally the solution we are looking at for an average user.

You can find these in varying sizes and with varying number of SATA ports.

You can easily find 2-8 SATA ports on these. However, it is important to take note of how many PCIe lanes the expansion card utilizes so that you understand the upstream and the downstream bandwidth of the expansion card.

We cover this more in the buying guide section below. It is very important that you understand PCIe lanes, PCIe version,  and throughput rate when buying the right expansion card.

Most of these SATA expansion card do not feature RAID controller.

These are professional SATA expansion cards that have an excellent upstream and downstream bandwidth and also offer hardware RAID controller.

These are more intended toward professional and enterprise use. For NAS users, particularly, these are highly recommended.

1. Version of The SATA Slot

Also Read: How to Identify SATA 1 2 3 on Your Motherboard and Drive?

2. Amount of Slots it Has

This is an obvious characteristic to look for. You can find SATA expansion cards with 2-8 SATA ports.

When choosing the amount of ports, you should take into account the size, and the PCIe version of the expansion card to make sure it can deliver decent bandwidth to each slot. We cover this important point below:

3. Size and PCIe Version  i.e How Many PCIe Lanes they Occupy (Very Important)

One of the most important point to take note of is the PCIe Connector Size, the amount of PCIe lanes it occupied and the PCIe version of the expansion card.

SATA expansion card can have x1, x4 or even x8 connectors. Each number after the ‘x’ generally indicates the amount of PCIe lanes the card will occupy.

So in the case of x1, the card would only occupy a single PCIe lane.

A normal hard disk when operating at max speed takes up about 200 MB/s. Therefore, if you have a SATA port with only an x1 connector conforming only to PCIe v2.0 with 4 ports. And you have all 4 drives connected and working at max capacity all at the same time, then you will have serious performance bottlenecks.

Let me try to explain with some examples:

Take the SATA expansion card above for instance.

For starters note that it uses only an x1 connecter and conforms to PCIe v3.0 protocol. Hence, it has a max throughput of 985 MB/s – this is actually the theoretical max throughput of a single PCIe v3.0 lane, in reality the throughput rate is lower than this. But for simplicity sake we will take 985 MB/s for this example.

Now the Expansion Card has 6 SATA 3.0 ports! So you can connect 6 hard drives to this. A typical hard disk, when operating at max capacity can occupy 200 MB/s of bandwidth.

If you have all 6 hard disks operating at max capacity at the same time, you will experience serious bottlenecks i.e 200MB/s x 6 = 1200 MB/s when your actual capacity is only 985 MB/s.

This situation would have been even worse had the expansion card conformed to only PCIe v2.0 (500 MB/s per lane).

This particular expansion card has an x4 connector but it actually only utilizes 2 PCIe lanes (according to its specifications). Hence given that it conforms to PCIe v3.0, it can reach speeds of about 2000 MB/s (theoretical); 1700 MB/s (typical).

It has double the bandwidth compared to the previous SATA expansion card. And with a bandwidth of about 1700 MB/s, it should be able to support all five connected hard disks at full capacity without any bottlenecks.

Here you MAY face issues if you connect SATA SSDs to them.

Also Read: What are SATA Ports Used For?

So when choosing an expansion card you have to make sure that it can deliver enough bandwidth down stream so that it does not cause any bottlenecks for the SATA SSDs.

For instance, the IO CREST expansion card we saw above was more than sufficient for 5 hard disks all operating at the same time, however, if you were to connect 5 SATA SSD Drives instead then that would cause bottleneck issues.

In all reality, most of the time you do not have to worry much about the bottlenecks if you have all of the ports on the expansion card occupied.

This is because it is highly unlikely that all the drives will be running at full bandwidth at the same time.

Drives run at idle state until you copy, read, install, or access files from them

Lastly, the important consideration when choosing the SATA expansion card is whether it has hardware RAID controller built-in or not.

These expansion cards are generally used by NAS builders and professionals.

In this article, we covered different types of solutions on how to add more SATA ports to a motherboard. Essentially, there are many solutions.

However, you have to understand some characteristics regarding how the PCIe expansion cards work before you go about getting the best one.

4 thoughts on “How to Add More SATA Ports to Motherboard?”