You can add more PCIe Slots to your computer using a PCIe splitter. You do need to have a free PCIe expansion slot on your motherboard so that you can plug in a PCIe splitter, aka riser, which then fans out to multiple external PCIe slots.

Having the option to add more PCIe slots is essential if the selection of PCIe slots on your motherboard isn’t enough to accommodate more expansion cards.

While it is always wise to invest in a motherboard that meets your requirements from the get go, if you do not have the budget to procure a new one, then PCIe splitters can certainly help you.

Here we discuss in detail how to add more PCIe slots. However, it should be noted that the splitters DO NOT increase the bandwidth or the amount of PCIe lanes you have available!

Also Read: How Many PCIe Lanes Do I Have?

How to Add More PCIe Slots?

Having more PCIe slots means getting the opportunity to install more expansion cards for various uses. However, there are only two ways to increase the amount of PCIe slots you have:

The first option is expensive and may not be viable if you already have a running system. Motherboards typically come with a fixed number of PCIe slots and these cannot be changed in any way outside of getting a new board.

The second option is simpler and cheaper and is probably what you came here looking for.

What is Splitting PCIe Slots?

The process of splitting a PCIe bus into several smaller buses is known as PCIe Bifurcation.

The process results in several PCIe connections made available to the user, allowing for the installation of more cards than the motherboard would have independently allowed.

Splitters Do Not Increase Bandwidth and Lane Count!

While a splitter does allow you to have more PCIe slots, an important point to keep in mind is that you don’t get more bandwidth in doing so.

The entire setup will perform at the maximum supported speed of the host PCIe slot version and its PCIe lane count.

So even if the PCIe version of the splitter card is V3.0, if the slot on the motherboard which it connects to is V2.0, the bandwidth will conform to that of PCIe v2.0.

Furthermore, and this is very important to note, PCIe splitters DO NOT increase the lane count! If you split a single x4 slot into two x16 slots, you will not have 32 PCIe lanes as a result. Instead, the bandwidth of the 4 lanes of the host card will be divided across the split ends. 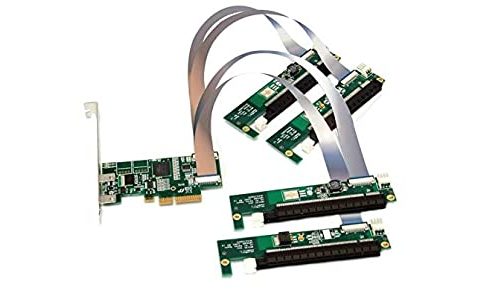 Take the splitter above for instance. So here, basically an x4 host card splits into 4 x PCIe x16 slots. If each of the splitter is occupied, then each of the connected device will be subject to the overall bandwidth provided by the x4 host slot.

So you cannot install 4 graphics cards on these and expect all of them to perform optimally for gaming. In fact, the performance will not even be close to optimal. Each graphics card is designed to use 16 PCIe lanes! They aren’t even intended to be used on x4 slots for gaming let alone on 4 way split.

Splitters are great for GPU mining (Crypto mining) where the number of GPUs you have matters.

They are also great when you want to install multiple smaller cards like a network adapter, sound card, USB or SATA expansion cards etc. Each of these cards utilizes only a single PCIe lane and thus would not saturate the host slot.

There Are Many Types and Configuration of Splitters

There are many types of PCIe splitters and they come in many configurations. The splitter above is an external PCIe splitter.

This splitter connects to x1 slot on the board and then splits into four x1 slots for further expansion. So basically, the idea here is that the amount of bandwidth the cards occupy on the splitters should not be greater than the bandwidth provided by the primary x1 host slot connected to the motherboard.

So for instance, if the host slot has a bandwidth of 1 GB/s, but if the bandwidth demand of the four connected devices on the splitter exceeds this amount, then you will notice performance issues.

On the other hand, if the four connected devices has a lower bandwidth demand than 1 GB/s, then they should work fine.

There can be more caveats when installing cards on the splitter such as their quality. Therefore, it is always advised to not occupy all the split slots at the same time. Instead, you should test and occupy slots one by one.

The Bandwidth of the Host Slot

The bandwidth of the host slot depends on factors like the size of the slot as well as the PCIe version:

A single PCIe 2.0 lane has 0.5 GB/s of bandwidth. A single PCIe 3.0 lane doubles this number and thus has 1.0 GB/s bandwidth. And so on. Each consecutive PCIe version double the bandwidth compared to its predecessor.

PCIe splitters and PCIe risers are the same thing.

PCIe riser is a term most often used in the Crypto Mining circles. It is called a “riser” card because it essentially lifts the installed cards above the motherboard.

Since a typical motherboard and a case does not have the space to accommodate the multiple graphics cards that a mining rig uses, “risers” are used to install the graphics cards externally.

For the common folks who are not so well versed with the Crypto Mining or PC jargon, they can settle with calling them PCIe splitters.

Also Read: How to Tell if RAM will Work with Your Motherboard?

Now you know how to add more PCIe slots to your computer. Physically changing the number of slots on the motherboard is impossible. Fortunately, you can use the PCIe bus from one slot to run multiple devices.

However, as mentioned earlier, more slots does not equate to more bandwidth.

So while this method allows you to share the PCIe bus with many card, however, you do not get better performance or increased bandwidths, just more devices over the same connection.

You have to make sure that the bandwidth demand of the connected cards does not exceed the supplied bandwidth from the host slot otherwise there can be bottlenecking issues.

7 thoughts on “How to Add More PCIe Slots?”